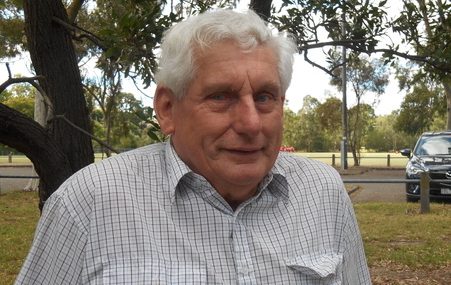 Barry’s connection with the St Kevin’s AAC goes back to the late 1950’s when he joined the club as a junior. He began his APOSC running in 1962 and quickly became addicted to the winter season events, particularly marathon running. His sixteen marathons included a best time of 2:54.41 in 1976.

Barry was St Kevin’s Secretary 1965-1973, Treasurer 1974-1976 and President 1976-1979, and was a committee member 1962-1986. He was a regular and loyal competitor during this period and was the mainstay of the club both administratively and athletically. The St Kevin’s winter championship award is named the BJ Jones Cup in recognition of Barry’s services to the club in cross country endeavours.

In APSOC races, Barry won the Orchard Handicap twice, in 1965 and 1984, and was a member of St Kevin’s winning Cooke-McClelland Shield team in 1969. Barry was the APSOC President 1979-80. For about twenty years from 1980, Barry’s printing firm, Cook and Snell Printing, produced the APSOC Handbook.