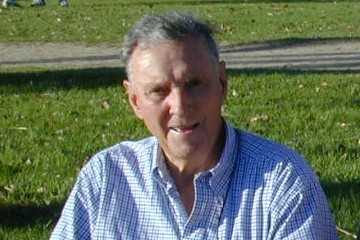 Basil Thomson began his long association with APSOC when he joined Old Xaverians in 1940. Ken McPhail spotted him boundary umpiring for the OX Football Club and recruited him to run cross country. From that time, Basil made extensive contributions to OXAC and APSOC as a competitor, official and administrator, and in a social capacity.

Basil competed in APSOC and VAA events on a regular basis for nearly fifty years until 1988. He was a member of the OX team which won the first Frank Dyson Relay in 1946. However, Basil’s forte was race walking rather than running. He was a regular walker on the track during the summer, making a significant mark on OX team performances. In 1953 Basil was appointed OX Track and Field Captain for the season. Later he was team manager of the OX track and field team and built one of the largest squads of walkers of any Victorian club by 1990.

Basil was also a timekeeper for the VAA (now Athletics Victoria) in both summer and winter competition for over fifty years, including being chief winter timekeeper for several years. His services were indispensable at numerous State and National Championships. He was an official for the Modern Pentathlon at the 1956 Olympic Games. He also acted as a walk judge on numerous occasions over the years.

Basil was President of OXAC for seventeen years from 1952 to 1969. He played a significant role in shaping the direction and character of both OXAC and APSOC, both during and after his time as President. Basil became an APSOC handicapper in 1968, developing a legendary association with Ken McPhail, often at a mutually convenient watering hole on Friday before a handicap event.

As well as being a hard worker in all of the above areas, Basil also enhanced the social aspects of OX and APSOC. He and his wife Dulcie hosted quite a few memorable social events at their home. Basil was awarded life membership of both OX and APSOC.

Basil continued to act as a timekeeper at APSOC events until 2011. He was a dearly loved and respected member of the OX and APSOC families.