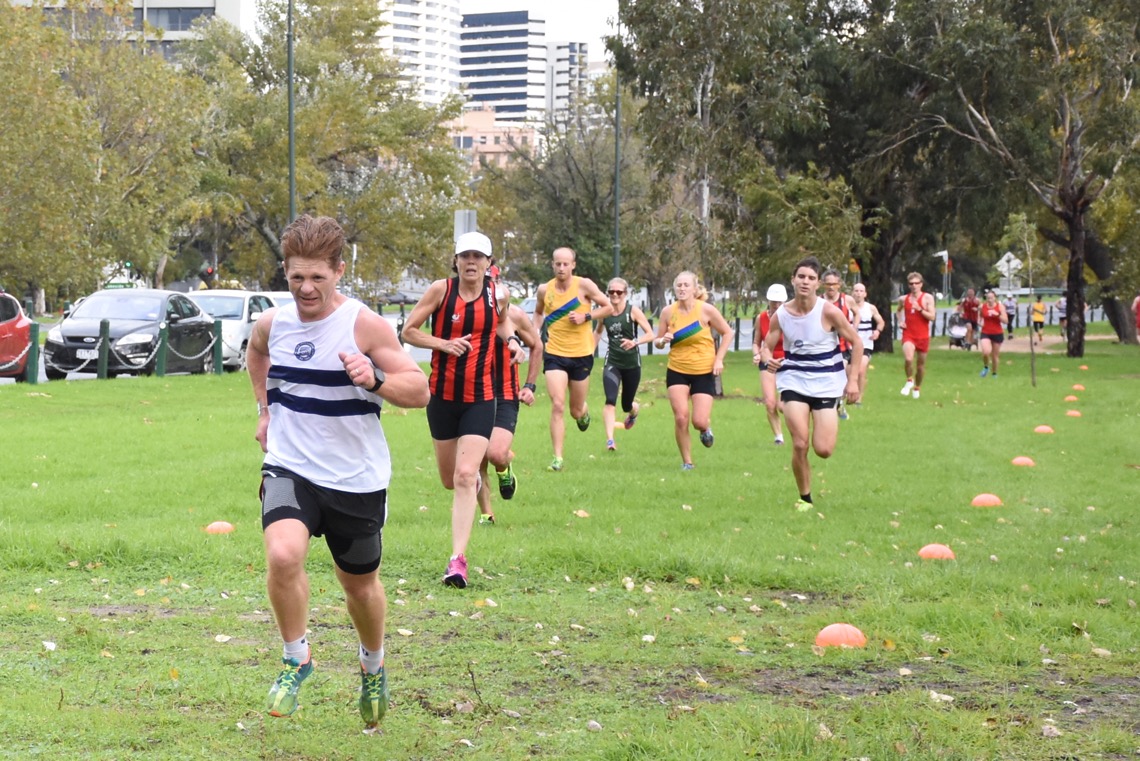 The Ken Orchard 10k Handicap, or ‘The Orchard’ as it commonly known, starts and finishes at the Wesley boatshed on Lakeside Drive, Albert Park, at the southern end of Albert Park Lake. It is a handicap race, with runners going off at starting times calculated by the handicapper’s computer. Competitors run two clockwise laps of the lake plus a 600m loop, starting and finishing at the same point. Afternoon tea, provided by Old Wesley Collegians AC, is served after the race at the boatshed.
This race originated in 1937 as the 5 Miles Handicap, one of the earliest events on the APSOC calendar. It was run as such until 1941 when the Association disbanded during World War II. Upon resumption in 1946, it was renamed the Ken Orchard Memorial Handicap in memory of Ken Orchard, an Old Wesley athlete who lost his life in air operations off Darwin in 1942. Ken was an enthusiastic secretary of Old Wesley before enlisting in the RAAF and in 1940 finished third in this event at Albert Park.
In common with most events of the time, in its early days the race was rotated between venues, but from 1959, being an Old Wesley-sponsored event, it was held at Albert Park. Until 1973, the event distance was maintained at 5 miles or 8 kilometres. From 1974, the distance was increased to the current 10 kilometres, comprising two laps of the lake plus a small loop at the end. This was presumably easier to handle than separate starting and finishing points and kept the course mainly on the lake bank. The five mile course had included a short cut across the golf course. For some time now the lake circuits have been run clockwise, but in earlier years the event was sometimes run anti-clockwise.
In 1995, with redevelopment work commencing in Albert Park for the Grand Prix, the event had to be moved to Fawkner Park, an attractive venue, but the distance required four laps of the park. This venue posed difficulties with parking and post-run refreshments, so in 2003 the Orchard returned to the lake.On a windy day, twice around Albert Park Lake provides a testing run regardless of wind direction and therefore a good cross-country course. The extra 600 metre loop when in sight of the finish also adds an extra degree of difficulty.Most of the Association greats over the years have featured as winners of this event, either on handicap or as fastest time. The record over the current circuit is held by Steve Austin (OS) in 30:27, just edging out Ewen Wilson (OS) and Richard Hope (SK) in 30:30. Anna Thompson (OW) has the fastest women’s time at Albert Park of 36:51.
+ Google Calendar+ iCal Export