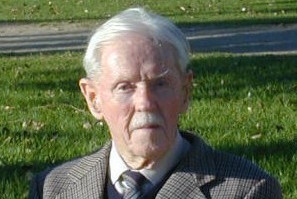 John Tutton joined OXAAC in 1934, just four years after its foundation. He was elected to the Committee a few months later and became Secretary in April 1937. To quote the OXAAC history, since then “he has run every distance, jumped over every obstacle, thrown, walked and negotiated all forms of cross country hazards ever since”.

Jack competed regularly on the track in 120 yards and 440 yards hurdles, 880 yards and mile, javelin and pole vault. He continued as club secretary apart from the war years, unchanged until his retirement in 1987. His fifty years as secretary must rank as an unparalled administrative feat and his dedication to the task was a major reason for Old Xaverians’ continued success as an athletic club during that period.

Jack was always a great supporter of cross country running. Over many years he rallied OXAAC teams for VAA events at a time when long distance running lacked the popularity of today. Likewise for APSOC events, he would leave no stone unturned to ensure the best OXAAC representation.

Jack was elected a Life Member of APSOC in 1973. He was President of APSOC 1949-1951 and always took a strong and active part in the development and organisation of the group.

As a cross country runner Jack was no star, but was always determined to give his all. He was often a member of winning OXAAC teams in the 1940’s and won the Ken Orchard 5 mile Handicap in 1963. He took another twenty years to overcome the wrath of the handicappers before winning the Veteran’s Trophy for the McPhail Handicap in 1983.

Jack served in the AIF during World War 2 as one of the “Rats of Tobruk” and was a keen ham radio operator.

After retiring from active competition, Jack remained a strong supporter of APSOC, being present at each Saturday run and assisting wherever possible to maintain the competition.