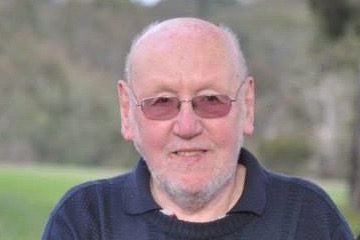 Michael joined Old Xaverians Athletic Club in 1948 and competed in sprints, middle distance and field events. In later years he was a VAAA Grade 1 official and announcer at the Olympic Park and University venues. He was the Chief Announcer for the 1969 National AAA Championships in Melbourne. In 1956, Michael was an official for the Modern Pentathlon at the Melbourne Olympic Games.

From 1950 he competed in the APSOC winter competition. It took him 28 years of regular competition to win his one and only event – the Ken Orchard Handicap. Being a club mate of the handicapper Ken McPhail was obviously no advantage. He completed four Melbourne Marathons.

There are other points of interest regarding Michael’s involvement in athletics. Michael was married for 56 years to Rosalind Landy, a cousin of great Australian athlete and former Governor of Victoria, John Landy. In 1956 he was a torchbearer in the Olympic Torch Relay, completing a one mile leg in precisely six minutes (as planned) somewhere out along the Geelong-Bacchus Marsh road.

Michael was the father of the late Christopher Van Assche. Chris was a promising Old Xaverian athlete (fastest time at Churchill Park in 1995), who died of leukaemia at the age of 30 years.

Michael continued his interest in sport as a volunteer at the National Sport Museum, conducting visitors around the archives at the MCG.