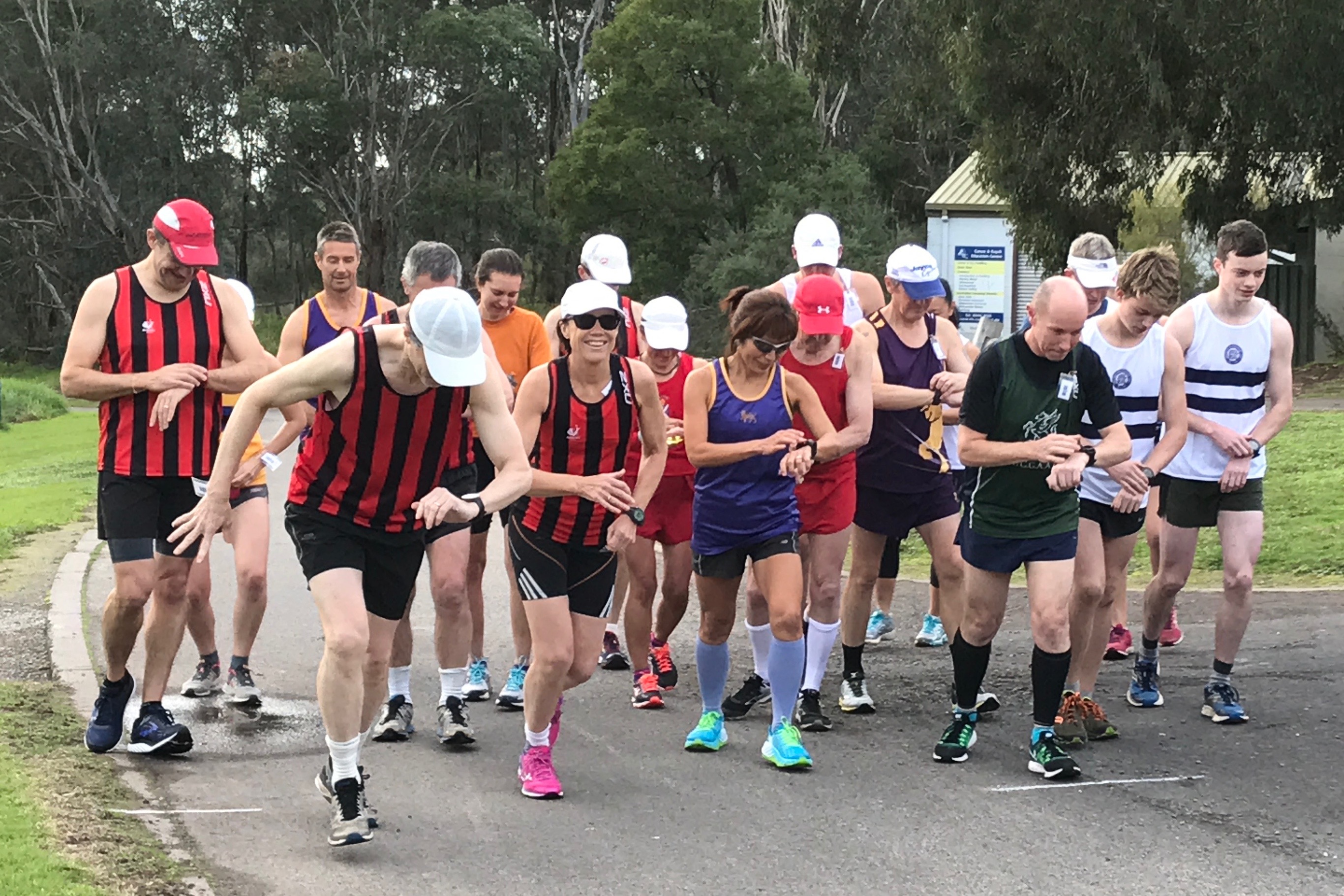 During the 1960’s, the APSOB Committee was looking to develop additional events, including at least one long event to cater for the increasing interest in marathons. Around this time, there was the arrival of the mini skirt. What better time to introduce a new set of events – the “mini marathons” of 21.1 km, 10.55 km and 5.275 km. The half marathon would suit the “real” distance runners, the quarter marathon the bulk of the members and the eighth marathon the social runners and sprinters. In 2011, the race distances were changed to 21.1 km, 10 km and 5 km.

In 1967 the first mini marathons were held at Bundoora, running on roads through Greensborough, the Plenty Gorge and South Morang. The starting times of the three races were staggered so that the leaders of each race would finish the event together. Following the event, runners and friends retired to the home of Colin Findlay in Bundoora for afternoon tea.

The Bundoora courses were used for a further two years, until encroaching housing development and increased traffic led to concerns for safety on the roads. From 1970, Graham Wise kindly agreed to host the runs from his home in Plenty Road, Whittlesea (really Yan Yean).  Peter Bruce (OX) won the initial half marathon event at Bundoora and a further six times at Yan Yean. Later, Olympian Steve Austin bettered this achievement with eight wins.

Over the ensuing 35 years, changes to the courses became necessary due to increased road traffic. In 2006 and 2007, gravel roads were used, and the numbers of competitors and supporters decreased. Nonetheless the main event of the day remained the sumptuous afternoon tea provided by our host Graham. Sadly, Graham died early in 2008, ending the era of the Whittlesea mini marathons.

The APSOC Executive had already surveyed a number of options for another venue, looking in particular, for courses free of road traffic and without the need for permits.  The picturesque Main Yarra Trail in Templestowe met these requirements and the 2008 event was scheduled there, starting in Westerfolds Park. The running surface is bitumen, with plenty of bends and hills. As a memorial to Graham, the event was named the Graham Wise Mini Marathons, recognizing his long association with the event of over forty years, his generous support and magnificent afternoon teas. In 2018, the APSOC Executive resolved to re-name the event as the Wise-Findlay Mini Marathons as a fitting tribute to both Graham Wise and Colin Findlay.

With staggered starting times for each race, runners should, as originally designed forty years ago, finish more or less together. Start times are as follows:

Runners need to check in at least ten minutes ahead of their event start time.

The half marathon is a ‘squeezed’ figure 8 course, with an added ‘warm up’ 2 km loop at the beginning. Commence on the Main Yarra Trail at the marked start/finish point (marker MYT550), facing west. Initially run in a westerly direction up the left hand path incline, then gradually down for 1 km, make a right turn onto the Main Yarra Trail (marker MYT552), then run back easterly through the start/finish line and pass under the Fitzsimons Lane bridge. Proceed to the east turn point (marker MYT540) near The Parkway, an extension of Blackburn Road (Melway Map 34 D1/D2) – 6.572 km completed. Do a U turn and return to start/finish point at which stage 11.1 km will be completed – 10k to go! Continue in a westerly direction 5.0 km, staying on the Main Yarra Trail to the west turn point at the end of the sealed path (marker MYT558) near the boundary of the Rosanna Golf Course (Melway Map 32 H2). Return to start/finish point to complete 21.1 km.

The 10 km commences at the start/finish point, running in a westerly direction on the Main Yarra Trail. Proceed 5.0 km to the turn point at the end of the sealed path near the boundary of the Rosanna Golf Course (marker MYT558). Return to start/finish point to complete 10 km.

The 5 km commences at the start/finish point, running in a westerly direction on the Main Yarra Trail. Proceed 2.5 km to the turn point approximately 230 m past the footbridge over the Yarra River, exiting Westerfolds Park. Return to start/finish point to complete 5 km.

Afternoon tea and presentations are made in a nearby shelter in Westerfolds Park. This is another event where all athletes are requested to contribute to afternoon tea.